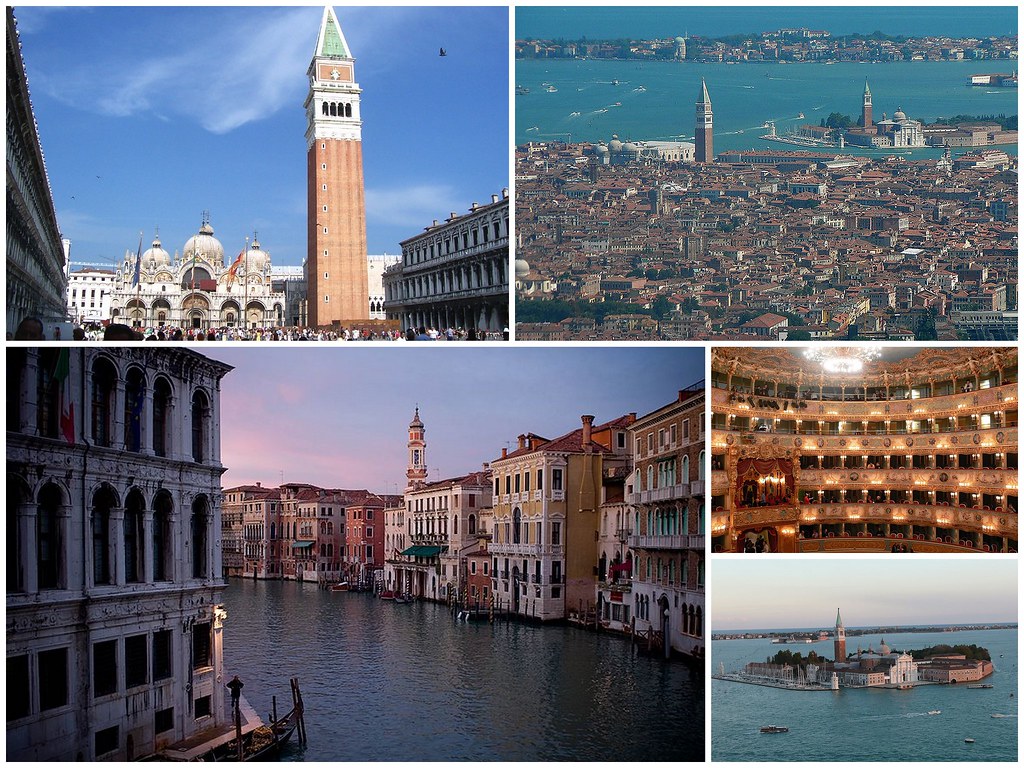 Above : Pictures of Venice Italy

"Using a genome-wide single nucleotide polymorphism (SNP) panel, we observed population structure in a diverse group of Europeans and European Americans. Under a variety of conditions and tests, there is a consistent and reproducible distinction between “northern” and “southern” European population groups: most individual participants with southern European ancestry (Italian, Spanish, Portuguese, and Greek) have >85% membership in the “southern” population; and most northern, western, eastern, and central Europeans have >90% in the “northern” population group. Ashkenazi Jewish as well as Sephardic Jewish origin also showed >85% membership in the “southern” population, consistent with a later Mediterranean origin of these ethnic groups. Based on this work, we have developed a core set of informative SNP markers that can control for this partition in European population structure in a variety of clinical and genetic studies."

The recent development of methodologies for defining population structure has provided the ability to identify the major ethnic contributions in individual participants in diverse populations. These statistical approaches utilize non-hierarchical clustering algorithms in which Markov chain Monte Carlo methods are used to infer ancestry, based solely on genotyping information. Furthermore, related algorithms provide methods for controlling for population stratification in genetic studies. These methods are important in assessing the results of case-control and other non–family-based association tests. In addition, defining population structure is potentially useful both in clinical outcome studies and in the examination of pharmacologic response and toxicity. Previous studies of human population structure have primarily considered different continental populations or admixed populations between two or more different continental populations. However, some of these studies have also suggested that sub-continental differences in population structure can be discerned. The examination of population differences within Europe using mitochondrial or Y chromosome haplogroups has been particularly useful in tracing part of the routes of migration and populating of Europe, but these haplogroups do not provide strong inferences on population genetic structure. Autosomal studies using small numbers of classical genetic markers (nuclear protein polymorphisms) have suggested broad genetic gradients across Europe, leading to the proposal of demic diffusion models. These include a principal component analysis of small numbers of classic genetic markers that suggested three clines accounting for a proportion of the genetic variation in the continent.

As we see above, each little line represents 1 Italian. As we can see, the Italians are scorching red here, even the Northern Italians; it looks like 1 (possibly although not certainly Northern) Italian is half blue.

"The definition of European population genetic substructure and its application to understanding complex phenotypes is becoming increasingly important. In the current study using over 4,000 subjects genotyped for 300,000 single-nucleotide polymorphisms (SNPs), we provide further insight into relationships among European population groups and identify sets of SNP ancestry informative markers (AIMs) for application in genetic studies. In general, the graphical description of these principal components analyses (PCA) of diverse European subjects showed a strong correspondence to the geographical relationships of specific countries or regions of origin. Clearer separation of different ethnic and regional populations was observed when northern and southern European groups were considered separately and the PCA results were influenced by the inclusion or exclusion of different self-identified population groups including Ashkenazi Jewish, Sardinian, and Orcadian ethnic groups. SNP AIM sets were identified that could distinguish the regional and ethnic population groups. Moreover, the studies demonstrated that most allele frequency differences between different European groups could be controlled effectively in analyses using these AIM sets. The European substructure AIMs should be widely applicable to ongoing studies to confirm and delineate specific disease susceptibility candidate regions without the necessity of performing additional genome-wide SNP studies in additional subject sets." 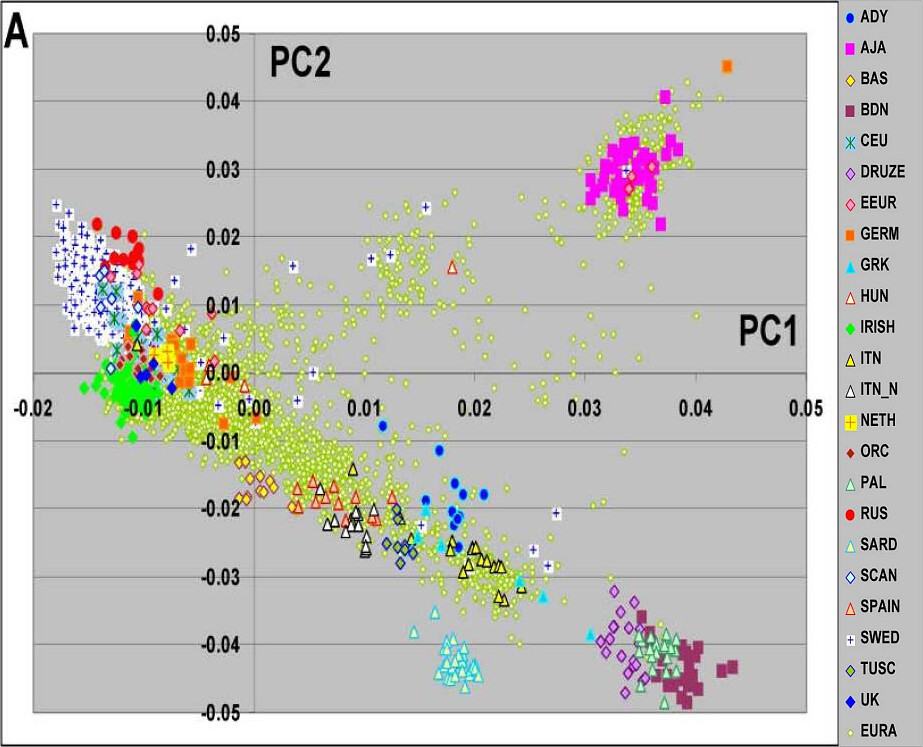 The lack of important European groups like the French and Swiss does seem to make the gap between Southern Europe and Northern/Central/Eastern Europe very large and not just gradual or clinal, but if those two populations were to be included the gap from Southern Europe to Central Europe would appear less significant with the alps showing a large (but not massive) barrier. Anyway, this study also irrefutably proves the Southern European biological affinities of Northern Italians and that is what is important.

Also, here is an interesting Fst genetic distance table from the study, although it unfortunately doesn't include Northern Italians it does include Tuscans (ie where the Renaissance first sprung up).

The results as seen in Table 1.


Genetic Structure of Europeans: A View from the North–East. Nelis et al (2009).

"Using principal component (PC) analysis, we studied the genetic constitution of 3,112 individuals from Europe as portrayed by more than 270,000 single nucleotide polymorphisms (SNPs) genotyped with the Illumina Infinium platform. In cohorts where the sample size was >100, one hundred randomly chosen samples were used for analysis to minimize the sample size effect, resulting in a total of 1,564 samples. This analysis revealed that the genetic structure of the European population correlates closely with geography. The first two PCs highlight the genetic diversity corresponding to the northwest to southeast gradient and position the populations according to their approximate geographic origin. The resulting genetic map forms a triangular structure with a) Finland, b) the Baltic region, Poland and Western Russia, and c) Italy as its vertexes, and with d) Central- and Western Europe in its centre. Inter- and intra- population genetic differences were quantified by the inflation factor lambda (λ) (ranging from 1.00 to 4.21), fixation index (Fst) (ranging from 0.000 to 0.023), and by the number of markers exhibiting significant allele frequency differences in pair-wise population comparisons. The estimated lambda was used to assess the real diminishing impact to association statistics when two distinct populations are merged directly in an analysis. When the PC analysis was confined to the 1,019 Estonian individuals (0.1% of the Estonian population), a fine structure emerged that correlated with the geography of individual counties. With at least two cohorts available from several countries, genetic substructures were investigated in Czech, Finnish, German, Estonian and Italian populations. Together with previously published data, our results allow the creation of a comprehensive European genetic map that will greatly facilitate inter-population genetic studies including genome wide association studies (GWAS)." 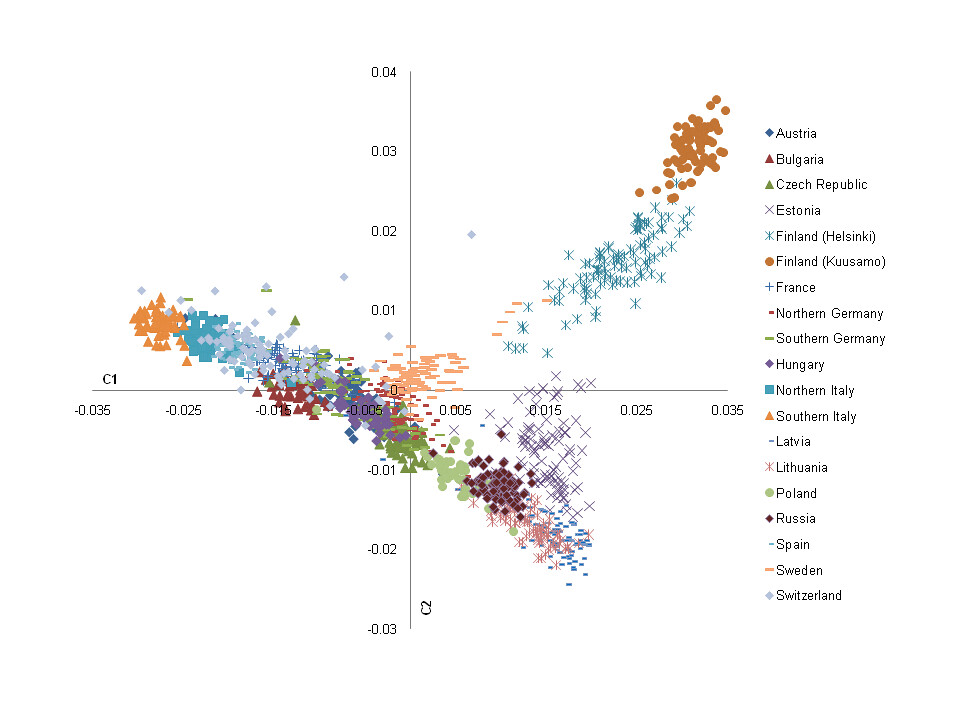 One more thing of note, unlike the other previous two studies, in this study the samples that represented Northern and Southern Italy only came from 2 different locations; here are the sample set locations as representative of "Northern Italy" and "Southern Italy".

Southern Italy:
"The Italian samples were randomly chosen from those enrolled in a population study named Carlantino Project, which is focused on inhabitants arising from an isolated village at the border between Central and Southern Italy (Province of Foggia, Region of Apulia with 1200 inhabitants)."

Also, it is important to note that while genetic distance is often heavily correlated to geographical distance, genetic barriers can be created by substantial geographical barriers which limit gene flow and cause breeding isolation. In Europe the Alps represent such a genetic barrier and it is not surprising that this study confirms that.

"Barrier analysis revealed genetic barriers between Finland, Italy and other countries, as has been described before [12]. Interestingly, barriers could be demonstrated within Finland (between Helsinki and Kuusamo) and Italy (between northern and southern part). Another barrier emerged between the Eastern Baltic region and Sweden, but not between the Eastern Baltic region and Poland (Figure S4). The barrier between Bulgaria and Western Russia, Poland and Lithuania may have arisen due to the fact that several populations are missing in between those countries" 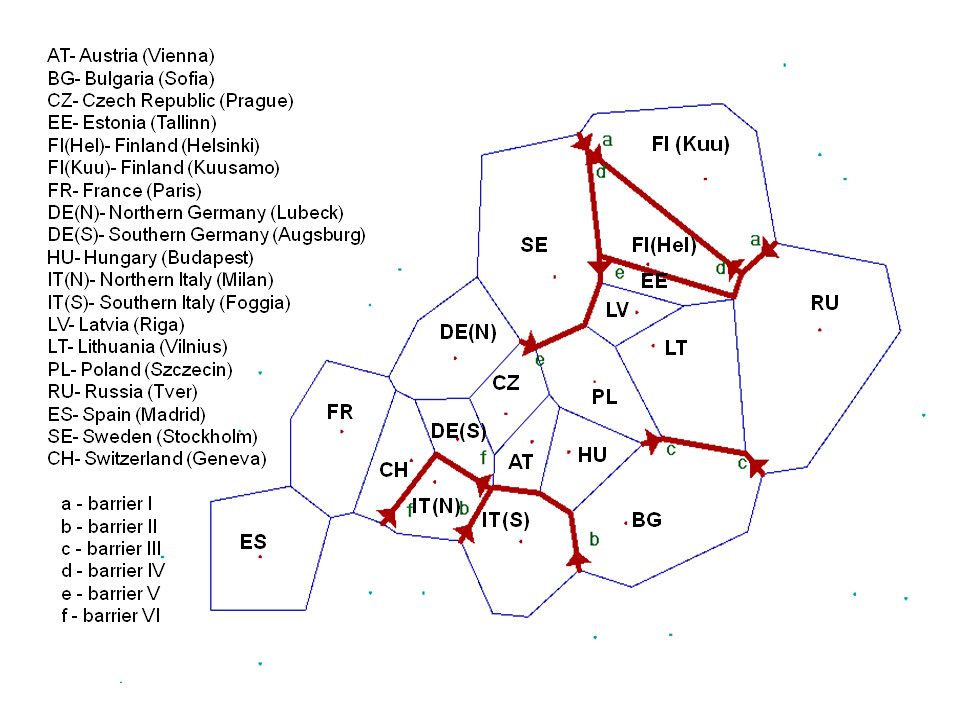 As stated above there is a noticeable difference between Northern and Southern Italians, according to PC analysis the medians of North and South Germans seem to be roughly 0.005 apart, while those of North and South Italians seem to be 0.005 apart. So no big difference among the ethnic stratification between the two countries. The biological difference between Northern and Southern Italians though rather noticeable, does seem to have been somewhat exaggerated by laymen 'racialists' of past and present. 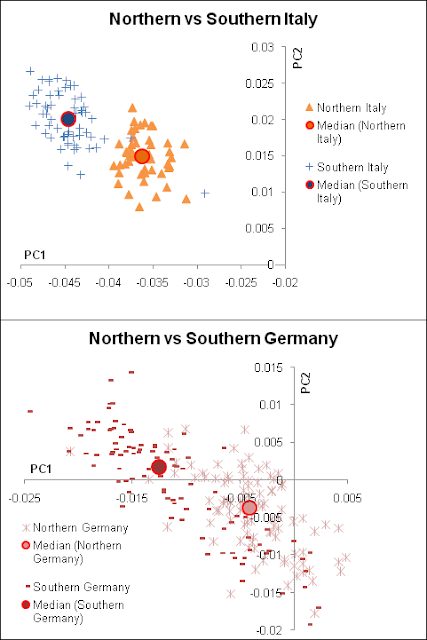 Also, other than the Greeks in Southern Italy, historical admixture seems to be quite minimal in Italians.

"An analysis of the genetic makeup of Italy's modern population argues that the various distinctive genetic combinations currently found in different regions within the peninsula by and large track the linguistic distribution that resulted from the migrations of the Iron Age. No data indicate the subsequent large-scale infusion of new genetic material into the populations of these regions except in the case of southern Italy and eastern Sicily, which is explained by the well-documented Greek migrations there."

The genetic article which that book used as a source for that statement is Piazza's "A Genetic History of Italy", and although unfortunately I don't have access to the entire study, the abstract is available online. It's conclusions are clear that the biological stratification seen in today's Italy is reflective of pre Roman times.


"Statistical techniques for displaying the geographical distribution of many genes in few synthetic images have been used to represent the various patterns of gene frequencies in Europe and in the world (Menozzi et al. 1978; Piazza et al. 1981a). It has also been shown that such synthetic displays are particularly useful in detecting clines of genetic differentiation associated with movements of populations like those accompanying the Neolithic expansion of farmers from the Near East or, in more recent times, the putative diffusion of Indo-European-speaking populations (Ammerman & Cavalli-Sforza, 1984; Gimbutas, 1973).

In this paper we use the same combination of statistical and graphical techniques to study the genetic structure of Italy, a European country whose unity of people and cultures was quite a recent event. The possibility of studying genetic differentiation in a small geographical area is tested and trends of genetic differences are tentatively interpreted in terms of historic and linguistic knowledge. The few demographic pieces of information taken from historical sources and compared with linguistic records support the hypothesis that the genetic structure of Italy still reflects the ethnic stratification of pre-Roman times."


(EDIT 2015) Admixture ratios in modern populations based on prehistoric genomes

All populations in Europe can be modeled as being a mixture of 3 major and distinct ancestral strains from prehistoric migrations. These are

2. Early European Farmers of the Neolithic revolution who had most their genetic origin in Mesolithic and Neolithic Anatolia and brought the earliest agricultural practices to Europe.

3. Early Bronze age Yamnaya steppe pastoralists from the Pontic-Caspian steppe, who's ancestors were the first to domesticate the horse. They were also one of the first groups on Earth who knew of and used wheeled vehicles. The Yamnaya steppe pastoralists are believed by most linguists to have been the speakers of the late stage proto Indo-European language (see Kurgan hypothesis).


As we can see in Figure 3 below, all Europeans can basically be modeled as a composite of the same 3 ancestral mixtures, it's just that the ratios are different. We can also see that that the biggest differences in Europe are between the North of Europe, and the South of Europe. As we can see in their admixture ratios, the Northern Italians (here represented by a sample set from Bergamo Lombardy) are unsurprisingly most similar to other Southern Europeans (ie Northern Spanish, Greeks, Albanians, Bulgarians, etc) in their admixture ratios, and that is being of heavy Early Neolithic Farmer ancestry. Tuscans as anyone can see also come out very heavily Neolithic. 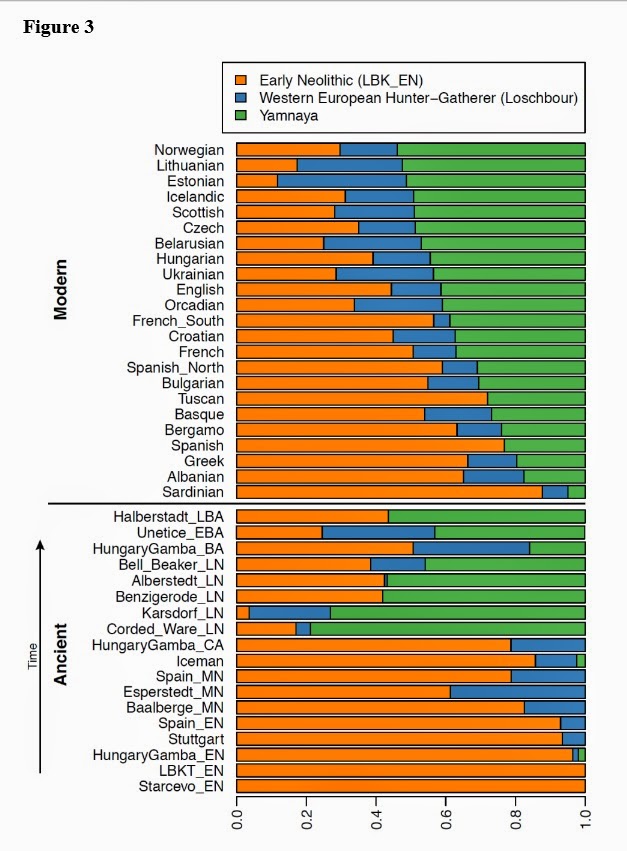 And lastly, for the most part irrelevant, I found some old hair and eye pigmentation data from Livi on Italian conscripts. Interesting stuff but for the most it's not that important. 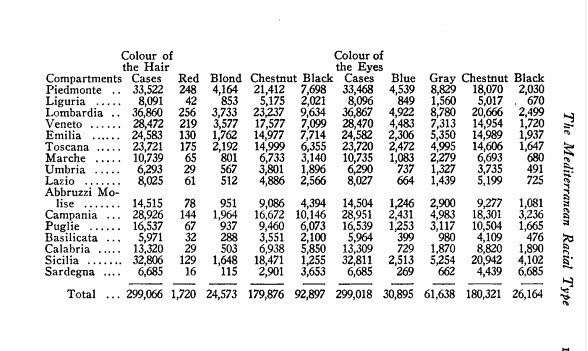