The origin of the Nile valley civilization has been one of speculation for centuries. Broadly speaking they were a 'Caucasoid' population, related primarily to fellow Northern Africans, and secondly related to Middle Easterners and Europeans. They were not however related to Sub-Saharan Africans of Central, West, and South Africa (ie 'Negroids').

"The biological affinities of the ancient Egyptians were tested against their neighbors and selected prehistoric groups as well as against samples representing the major geographic population clusters of the world. Two dozen craniofacial measurements were taken on each individual used. The raw measurements were converted into C scores and used to produce Euclidean distance dendrograms. The measurements were principally of adaptively trivial traits that display patterns of regional similarities based solely on genetic relationships. The Predynastic of Upper Egypt and the Late Dynastic of Lower Egypt are more closely related to each other than to any other population. As a whole, they show ties with the European Neolithic, North Africa, modern Europe, and, more remotely, India, but not at all with sub-Saharan Africa, eastern Asia, Oceania, or the New World. Adjacent people in the Nile valley show similarities in trivial traits in an unbroken series from the delta in the north southward through Nubia and all the way to Somalia at the equator. At the same time, the gradient in skin color and body proportions suggests long-term adaptive response to selective forces appropriate to the latitude where they occur. An assessment of “race” is as useless as it is impossible. Neither clines nor clusters alone suffice to deal with the biological nature of a widely distributed population. Both must be used. We conclude that the Egyptians have been in place since back in the Pleistocene and have been largely unaffected by either invasions or migrations. As others have noted, Egyptians are Egyptians, and they were so in the past as well."

"Roughly three major constellations are evident. The Subsaharan African, Southeast Asian, and Oceanian samples form a cluster in one quadrant of Figure 2a. However, the Subsaharan African samples form a distinct grouping, well removed from the Southeast Asian and Oceanian samples on the third and fourth principal coordinates. In Figures 1 and 2, the Subsaharan African samples show significant separation from other regions, as well as diversity among themselves. The East/Northeast Asian and European samples form two additional discernable clusters. The New World and Arctic samples are peripheral subgroups in the large East/Northeast Asian cluster, and the two Ainu samples are outliers to other East Asians. The Central Asian samples are located between the Eastern Asian and European clusters. In the bottom half of Figure 2a, the South Asian samples are nearest to the center of all groups, the North African samples are a bit further removed, and the European samples are more separated, having the lowest scores on principal axis 2. Applying the neighbor-joining method to the MMD distances results in the dendrogram illustrated in Figure 3. The initial split, suggesting the greatest dissimilarity, is between Subsaharan Africans and the rest of the world. The Europeans, North Africans, and South Asians are then separated from the remaining groups. Oceania and the Southeast Asian groups form a separate branch that is separated from a large grouping of Central andEast/Northeast Asian, Arctic, and New World series clusters. The Arctic cluster, which includes groups from northeasternmost Siberia, is deep in a branch containing all New World groups. The Ainu samples are more similar to mainland groups from the Amur River basin and Lake Baikal than to the Japanese."

"The dendrogram produced by Ward's clustering procedure for the global data set is shown in Figure 3 and provides a relatively similar representation of the MMD^sub st^ distance matrix than that provide by the MDS analysis. The populations clearly fall into two groups. The first main group can be broken down into two subgroups: (1) all the recent sub-Saharan populations and (2) mainly Central, East, and Northeast Eurasians. West Eurasians form the second main group, which is also subdivided into two subgroups. One of these subgroups includes all the eastern Mediterranean populations (three ancient Egyptian/Sudanese populations from Naqada, Gizeh, and Kerma as well as the Cypriot/Turkish, Greek, and Sagalassian populations) and the Scandinavian sample; the second subgroup includes the other West Eurasian populations."

Pre-Dynastic and 12th-29th Dynasty Egyptians cluster with modern Afghans and modern North Indians on the edge of a larger cluster of modern Europeans and modern West Asians.

It has been argued by Afrocentrists that dental data is insufficient because of  "tooth sized reduction" which indeed can undergo high change do to selective forces which have to do the diet of a population and other things, thus creating results that don't have much to do with genetic admixture or relatedness [for example see here]. However, in this study tooth size and it's effects were controlled and these relationships do indeed broadly match both cranio-facial and genetic data.


"It was asserted that tooth size has been exposed to strong natural selective force (Brace et al., 1991). It is true that overall tooth size plays a major role in odontometric variation, but when the effects of overall tooth size are eliminated with standardized data, several independent vectors with eigenvalues greater than 1.0 remain."

"Mesiodistal and buccolingual crown diameters of all teeth recorded in 72 major human population groups and seven geographic groups were analyzed. The results obtained are fivefold. First, the largest teeth are found among Australians, followed by Melanesians, Micronesians, sub-Saharan Africans, and Native Americans. Philippine Negritos, Jomon/Ainu, and Western Eurasians have small teeth, while East/Southeast Asians and Polynesians are intermediate in overall tooth size. Second, in terms of odontometric shape factors, world extremes are Europeans, aboriginal New World populations, and to a lesser extent, Australians. Third, East/Southeast Asians share similar dental features with sub-Saharan Africans, and fall in the center of the phenetic space occupied by a wide array of samples. Fourth, the patterning of dental variation among major geographic populations is more or less consistent with those obtained from genetic and craniometric data. Fifth, once differences in population size between sub-Saharan Africa, Europe, South/West Asia, Australia, and Far East, and genetic drift are taken into consideration, the pattern of sub-Saharan African distinctiveness becomes more or less comparable to that based on genetic and craniometric data. As such, worldwide patterning of odontometric variation provides an additional avenue in the ongoing investigation of the origin(s) of anatomically modern humans."

"In several previous studies (e.g. IRISH 1993a, 1994, 1995, 1996, 1997) the biological affinities of Sub-Saharan and North African dental samples were estimated based on comparative analyses of morphological traits. A significant dichotomy between samples from the two geographic regions was revealed. However, intra-region trait homogeneity was observed, particularly within North Africa. Further analyses of the North Africans resulted in two additional findings. First, this homogeneity spans both space - from the Canary Islands to Egypt, and time - from recent Arabs and Berbers to West Asian-derived Carthaginians (751?-146 BC), 18th Dynasty (1575-1380 BC) Pharonic Nubians, and 12th Dynasty (1991-1783 BC) Egyptians. A small Capsian sample (ca. 8,500-5,000 BP) from Algeria and Tunisia also exhibits many trait similarities. Late Pleistocene Nubians (14,500-12,500 BP), however, are significantly different. Second, the post-Pleistocene North Africans are similar to Europeans in that they possess numerous dental features involving morphological simplification. Any North African deviations away from this pattern are in the direction of mass-additive Sub-Saharan traits. This finding supports the results of prior genetic-based studies that link North Africans to Europeans and western Asians, yet record several Sub-Saharan tendencies. Together, the two findings suggest that a morphologically simple dental pattern is shared by the indigenous peoples of North Africa, as well as Europe and perhaps western Asia, and this pattern has existed for the past 4,000 to perhaps 8,500+/- years." 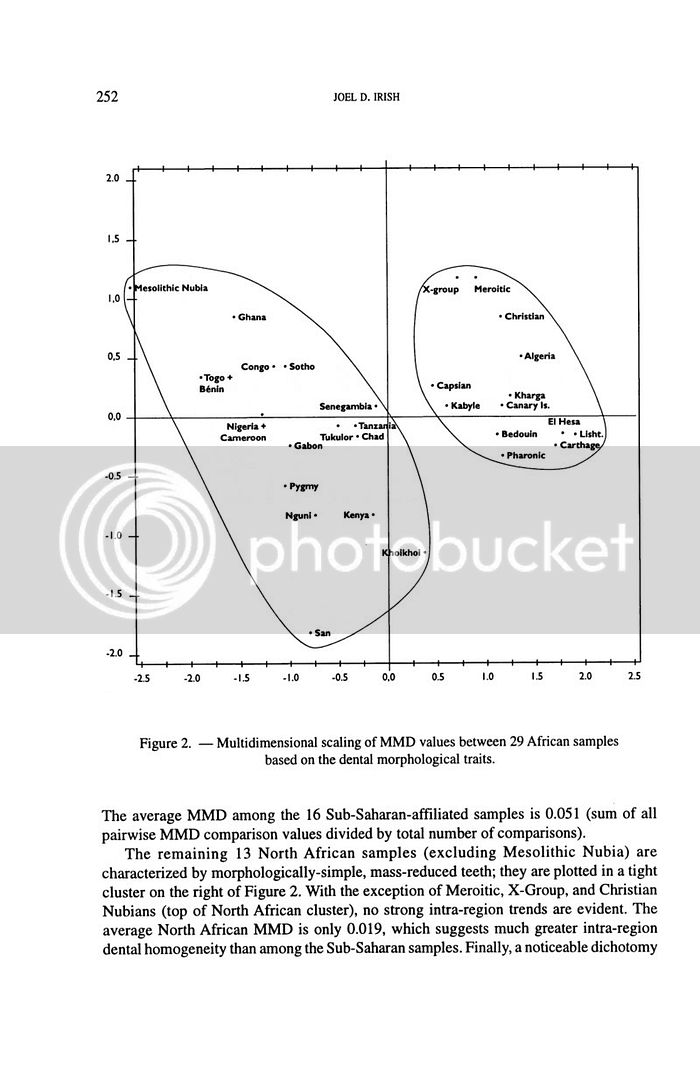 
"However, all 15 samples exhibit morphologically simple, mass reduced dentitions that are similar to those in populations from greater North Africa (Irish, 1993, 1998a–c, 2000) and, to a lesser extent, western Asia and Europe (Turner, 1985a; Turner and Markowitz, 1990; Roler, 1992; Lipschultz, 1996; Irish, 1998a).Similar craniofacial measurements among samples from these regions were reported as well (Brace et al., 1993)"

This contrasts with the dental pattern of Sub-Saharan Africans who had massive complex teeth.

''Is this the true face of Tut? This silicone-skinned bust is billed as the most accurate forensic reconstruction ever of ancient Egypt's Pharaoh Tutankhamun. It was based on recent 3-D CT scans of the mummy of the "boy king," who is believed to have been about 19 when he died some 3,300 years ago.

Paris-based forensic sculptor Elisabeth Daynès then created the bust shown above. She used Vignal's estimates of skin thickness and other data, plus wooden sculptures of Tut made in his youth. Soft-tissue features, such as the nose and ears, had to be guessed at, though within a scientifically determined range. Daynès based the skin tone on an average shade of Egyptians today and added the eyeliner that the king would have worn in life.

Finally, National Geographic gave the CT data to a U.S. forensic team, who were to work "blind"—not knowing who the subject was. Their findings validated the French team's conclusions. And their plaster cast (see photo) turned out remarkably similar to the silicon bust. The reconstruction will be featured in the June issue of National Geographic, in the touring exhibit "Tutankhamun and the Golden Age of the Pharaohs," and on the National Geographic Channel's King Tut's Final Secrets, airing Sunday night."

For the full story, see "King Tut's New Face: Behind the Forensic Reconstruction."

See more pictures of the reconstruction.

"Egypt, located on the isthmus of Africa, is an ideal region to study historical population dynamics due to its geographic location and documented interactions with ancient civilizations in Africa, Asia and Europe. Particularly, in the first millennium BCE Egypt endured foreign domination leading to growing numbers of foreigners living within its borders possibly contributing genetically to the local population. Here we present 90 mitochondrial genomes as well as genome-wide data sets from three individuals obtained from Egyptian mummies. The samples recovered from Middle Egypt span around 1,300 years of ancient Egyptian history from the New Kingdom to the Roman Period. Our analyses reveal that ancient Egyptians shared more ancestry with Near Easterners than present-day Egyptians, who received additional sub-Saharan admixture in more recent times. This analysis establishes ancient Egyptian mummies as a genetic source to study ancient human history and offers the perspective of deciphering Egypt’s past at a genome-wide level."

PCA plot in Figure a below reveals Ancient Egyptian clustering on a global scale. The magnified rectangle gives a detailed analysis of how the Ancient Egyptians cluster in a modern West Eurasian and North African context.

Also ADMIXTURE analysis in Figure b reveals ancestral components that peak in Natufians, Neolithic Anatolians, and Neolithic Iranians..but do not exist in modern Sub-Saharan West Africans. Most modern North African samples, including modern Egyptians have a small but noticeable increase in Sub-Saharan ancestry [red] that ancient Egyptians and ancient Middle Easterners lacked during the Neolithic to Bronze age.

I thought I would edit the PCA and remove the magnified rectangle in Figure a for clarity. This gives us an idea how homogeneous the West Eurasian genetic cluster is, which includes present North Africans. It also demonstrates just how vast the differences are between the Ancient Egyptians and Modern Sub-Saharan groups. Even East Africans from the Horn such as Somalis show no strong ties to Ancient Egyptians.