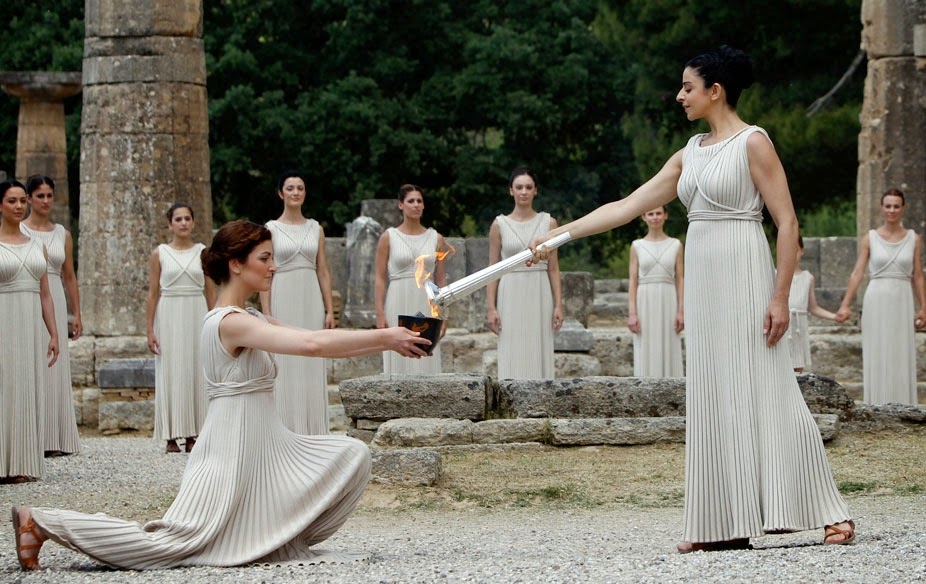 
It is occasionally stated that today's Greek speaking population of Greece and the Aegean & Ionian seas bare little physical resemblance, and have little to no ancestral connection to the Greeks of old.  The doubters usually say so out of ignorance or an obvious racial bias of their own. However, regardless of anyone's opinion, the notion is completely falsified by hard scientific inquiry. There exists much data and summaries in the (physical) anthropological literature refuting those type of dubious claims.


The most comprehensive skeletal analysis of ancient Greek material was done by the late J. Lawrence Angel. Angel took a schematic approach though his examination of Greek skeletal remains by way of his own conceived morphological/typological system. By this method he came to the conclusion that modern Greeks show significant physical continuity and physical similarity to the ancient Greeks.


"So great is the phenotypic racial continuity of the Greek people in ancient times (and probably down to the present day) that the average ancient Greek male defined by the total series in table 2 may well stand for ancient Greece as a whole as well as for the standard of comparison for the six types."


Angel came to the conclusion that the Mycenaean era ancient Greeks descended largely from an earlier Neolithic 'pre Greek' agricultural population around the Aegean, which then amalgamated with Bronze age migrations from the north [and also to a lessor extent from the east]. Once this synthesis was complete, the basic foundation of the Greek ethnicity was formed. This Mycenaean foundation is STILL the fundamental genetic foundation of the living Greeks.


"The Mycenaean blend seems to be fundamental in all later Greek populations down to the present day. Its formation was principally absorption of Middle Bronze Age intrusive strains by the pre-Greek racial substratum."


1. "Ancient Greeks as a whole are unusually heterogeneous.

3. Greek racial history shows an alternation of an overwhelmingly ‘ ‘Mediterranean” complex reflecting southeastern maritime infiltrations, and a more balanced Alpine-influenced combination of all types reflecting northern invasions. The former is typical of Mycenaean and Classical periods and occurs in the third millennium R.C. The latter dominates Middle Bronze, Early Iron, and Roman periods, with compromise effect in Byzantine. Within these fluctuations of opposing tendencies the major racial trend is in an Alpine direction, with minor Dinaric specialties.

4. Racial continuity in Greece is striking.

5. Some trends, such as increase in nose size, reflect genetic re- combinations, others, such as gross size increase, respond to environmental changes."


SOURCE : Angel, J. Lawrence, 1944, A racial analysis of the ancient Greeks: An essay on the use of morphological types, American Journal of Physical Anthropology


Years later, after 2 decades of continued research, Angel would review another less reputable Greek anthropologist's work on the race of the ancient Greeks. Although Angel was certainly critical of that anthropologist's methodology; he did come to one very important agreement with him, and that is his conclusion on the continuity of the Greek people.


"This he does in a rather unsystematic way by citing some findings from the many workers who have reported on skeletons from Greek territory. Perhaps inevitably he omits about half of the literature; it is not clear if it was available to him, especially if he wrote the book in Tashkent rather than Moscow. But the result is that he tends to overvalue speculations based on small samples as opposed to statistically tested changes. Never the less he is correct in pointing out that some regional “types” are largely derived from pre-Indo-European and from pre-Turkish populations, that there is complete continuity genetically from ancient to modern times, and that the major modern contrast among Greeks is between the groups from Eastern Anatolia and those from Greece and the Aegean. He is incorrect in the general conclusion that environmental change is never enough to create a new type: apparently meaning that selection cannot follow from environmental change."


SOURCE : Angel, J. Lawrence, 1964, The origin of the Hellenes. An ethnogenetic inquiry. Aris N. Poulianos. 160 pp, 5 tables, 9 maps, 32 photographs. 1962. Morphosis Press, Athens. Originally published in 1960 by the Institute of Ethnography of the Academy of Sciences of the U. S. S. R., translated into Greek by the author with special assistance of Nikos Antonopoulos, American Journal of Physical Anthropology, Volume 22, Issue 3, Date: September 1964, Pages: 343-345


Modern craniometric data indicates the genetic continuity of the Greek people as well. A 1989 investigation showed


"A comparative cephalometric investigation was conducted between modern and ancient Greeks to determine craniofacial characteristics and to examine the significance of ethnic heritage. The modern sample was composed of 54 individuals chosen on the basis of ethnic background, normal occlusion and facial harmony. The ancient sample consisted of 40 skulls with normal occlusion dated back to the Minoan civilization (ca. 1,800-1,200 B.C.). A remarkable similarity in craniofacial morphology was revealed between the two groups, suggesting a close genetic affinity between modern and ancient Greeks. The ability of the craniofacial complex to make compensatory or balancing changes was noted. The craniofacial complex was seen to function as an integrated biological entity. Moreover, the cranial base showed a definite influence on skeletal profile configuration. These results provide a more comprehensive understanding of how craniofacial variables interact and contribute to the morphology of the dentofacial skeleton."


It should be noted here for accuracy's sake that the ancient sample is not from the Greek mainland nor from the classical era, but rather from Bronze age Crete.


"The material representing the ancient Greeks was drawn from the collection of crania in the museums of Herakleion and Chania, both located on the major Greek island, Crete.......The ancient Cretan skulls dated back to Minoan civilization, during the Bronze Age of 1,800-1,200 B.C."


While the modern sample constituted


"The sample of the modern Greeks consisted of 54 native Greek children (30 girls and 24 boys) born and reared in Athens and Pireaus (Greece) having an average age of 12 years."


I suppose one could reasonably argue that just because modern southern Greeks from Athens and Pireaus show strong craniofacial similarities to ancient Bronze age Cretans, doesn't mean modern Greeks would show strong similarities to classical Greeks. However I disagree with strong objections, since another craniometric study done by French anthropologist Alain Froment from 1992 shows classical era Greek skulls to be pretty similar to Bronze age Cretan ones. See craniometric plot below by Froment for details. 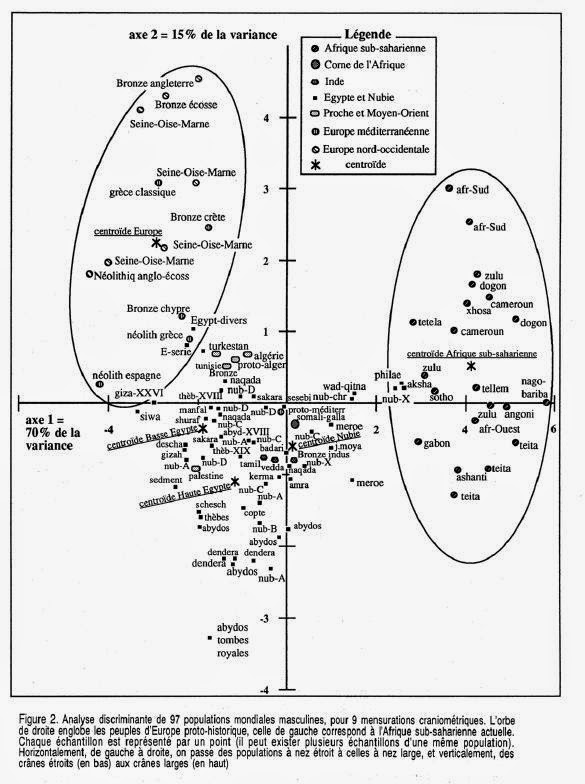 
A more recent craniometric analysis indicated modern-ancient Greek genetic continuity as well as physical (craniofacial) similarity. Although the study did not rule out admixture from (physically/racially similar) outside populations, as it's well known that a significant minority of Slavs and Arvanites settled and assimilated into the Greek populace.

"BACKGROUND: Multiple 20th century studies have speculated on the anthropological similarities of the modern inhabitants of Greece with their ancient predecessors. The present investigation attempts to add to this knowledge by comparing the craniofacial configuration of 141 ancient (dating around 2,000-500 BC) and 240 modern Greek skulls (the largest material among relevant national studies).

METHOD: Skulls were grouped in age at death, sex, era and geographical categories; lateral cephalograms were taken and 53 variables were measured and correlated statistically. The craniofacial measurements and measurements of the basic quadrilateral and cranial polygon were compared in various groups using basic statistical methods, one-way ANOVA and assessment of the correlation matrices.

OBSERVATIONS: Most of the measurements for both sexes combined followed an akin pattern in ancient and modern Greek skulls. Moreover, sketching and comparing the outline of the skull and upper face, we observed a clock-wise movement. The present study confirms that the morphological pattern of Greek skulls, as it changed during thousands of years, kept some characteristics unchanged, with others undergoing logical modifications.

CONCLUSION: The analysis of our results allows us to believe that the influence upon the craniofacial complex of the various known factors, including genetic or environmental alterations, is apt to alter its form to adapt to new conditions. Even though 4,000 years seems too narrow a span to provoke evolutionary insights using conventional geometric morphometrics, the full presentation of our results makes up a useful atlas of solid data. Interpreted with caution, the craniofacial morphology in modern and ancient Greeks indicates elements of ethnic group continuation within the unavoidable multicultural mixtures."