J. Lawrence Angel on the Racial History of Greeks.

More like typological history (or a chronology of morphological change), a now abandoned science. But I did find what he had to say somewhat interesting.

"No type frequency predictions have been worked out for the small
series of living Greeks from around the isthmian region, since estimated skull measurements like those of the next to last column of table 8 can never be certain, although they allow comparison. The average is a well-filled and fairly high-headed brachycephaly, with high and broad forehead and nonprotuberant occiput. The face is broad and not excessively high, somewhat square in outline, and marked by broad jowls, strong chin and cheekbones, long, thick, and straight (-convex) nose, and poor teeth with a developed overbite. Alpine dominance is linked with a pervasive though limited Dinaric trend and contrasts with a strong Basic White minority. Gracile Mediterraneans are common, and Nordic-Iranians not absent though rarer than in north Greece. The modern Greek series resembles the Roman more than the Byzantine sample and continues Roman period trends away from the Classical period norm. This shows the racial continuity between ancient and modern Greeks, though the modern sample differs considerably from ancient Greeks taken as a whole.

Next to their heterogeneity, this unbroken racial continuity of the Greeks is the most important conclusion from the outline of their racial history. Continuity does not mean stasis. And several long-term trends are perceptible in tables 6, 7. 8 and 9 in addition to the period by period racial fluctuations.

The major racial trend is a gradual shift from a virtually longheaded, “Mediterranean” mode toward an Alpine norm, with incipient Dinaric features subtly added 26 as suggested in figure 13. Inclusion of Alpines with southeastern as well as with northern immigrations into Greece may well be one reason for this trend, which derives inextricably from alternation of two contrasting racial complexes. One is a dolichomorph and mainly Mediterranean blend, generally unified, and characteristic of periods of cultural unity such as the Mycenaean and Classical, with weaker effect in the Early Bronze Age. The other is marked by Alpines either mixed with or next to Nordic-Iranians, heterogeneous, and occurring in phases of invasions and confusion such as the Middle Bronze Age, Early Iron Age, and Roman period. The Byzantine sample These fluctuations have been linked with sea-borne immigrations from south and southeast and with invasions from north, northeast, or east respectively, and with the absorption of such intruders by the established population of Greece. This forms a regular cycle of racial change so timed that the fluctuations describe an irregularly spiral patharound the central racial trend.

Two less sweeping trends are interesting because the type predictions in table 7 show them incompletely or not at all, and they are therefore emphasized by their departure from prediction. The first of these is a steady increase in nose size from Middle Bronze down to Roman times, and then down to the present day. Roman period nose height significantly exceeds Middle Bronze or Mycenaean values, and nose breadth almost does so. This is shown weakly in the predictions from Mycenaean times onward, and must be some sort of Dinaric-Iranian genetic recombination.

The second trend is a rather sharp rise in bigonial breadth starting
earlier than the slight Alpine increase in other face breadths and continuing less markedly down to modern times. This shows a steady departure from predicted values. It springs apparently from Nordic-
Iranian and Basic White recombination of linked genes, with secondary
association with Alpine features.

The major non-racial trend is a general increase in stature, especially from prehistoric into historic times, utterly unpredicted by morphological type changes, and supported by a less clearcut increase in head size, involving horizontal circumference and skull base length especially, up to Roman times, with a definite drop in the Byzantine period. Byzantine stature may be overestimated. And it is virtually certain that this size increase is environmentally caused by a steady improvement in diet and hygiene from prehistoric to Classical and Roman times, followed by a medieval lapse.

The dentition of ancient Greeks shows many interesting chronological fluctuations, with one major trend worth stressing. This is a morphological complex involving more overbites, slightly deeper
glenoid fossae, probably more crowded teeth and more alveolar absorption, degeneration of the third molar, and shallower and slightly
more prominent chins. It develops from prehistoric to historic times,
reaching full bloom in the Roman period and again among living
Greeks. This masticatory degeneration clearly is linked with use of
more “civilized” food, with other causes less obvious, though a connection with increasing Alpine influence seems unlikely.

From a broad anthropological standpoint fluctuations in variability
are the most interesting ones. Mycenaean and Classical periods of
commercial success and high cultural achievement both show a “normal”, relatively low, variability with dominance by a single “Mediterranean” racial amalgam : a smooth pan-mixia of potentially contrasting genetic tendencies. These periods follow and precede historic phases of invasions, isolation, and cultural confusion marked by high variability with an even balance between contrasting types or a struggle for dominance between two divergent type complexes. Thus a pattern of vigorous outbreeding and rapid racial fusion marks the transition from Middle Bronze Age to Mycenaean and less extremely from Early Iron Age to Classical period: formation of a successful culture is linked with formation of a smooth racial blend. The relatively slight rise in Early Iron Age variability 29 is a function of the relatively short duration of the Dorian invasions with less complete cultural depression than in other periods of turmoil. Hence the major trend in variability is a significant drop from the elevated Middle Bronze Age level followed by a stress on racial fusion into the Classical period, with subsequent rise in variability and in racial heterogeneity. This trend makes clearer the association of reduced variability and racial fusion with such things as population increase and free intercommunication between easily isolated harbors and valleys, as well as general high level of culture.

Thus although the use of types allows a more dynamic understanding than otherwise possible of the connection of changes in variability with race mixture, it does not show the ultimate causes of racial fusion nor the precise relation of this process to cultural achievement. These things obviously would be of great psychological, social, and historical interest. Without a more detailed sociological analysis it is impossible to draw far-reaching conclusions along these lines. But race mixture is a genetically stimulating process (Ashley Montagu, '42, pp. 98-1W), and the facts arrayed by typological analysis of Greek racial history support the historical principle that great peoples are as intensely mixed biologically as culturally." 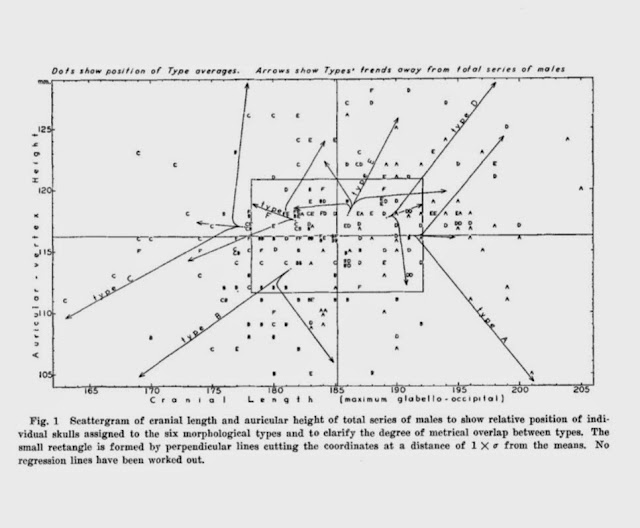 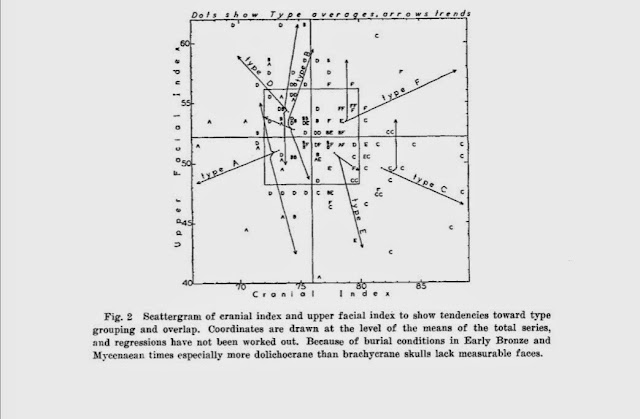 So basically what has happened in a typological perspective is the average Greek cephalic structure has increased. The Classical Greeks were on average low Mesocephalic, while today's Greeks are low brachycephalic or maybe approaching high Mesocephalic. This seemed to happen in the Middle ages, and it didn't happen just in Greece, but in many countries like Poland and Germany. It doesn't necessarily mean significant geneflow from the outside or North from Slavs, that of course is a question that population genetics can and will eventually answer.  However, there are still plenty of low mesocephalic and dolichocephalic Greeks, brachycephalization is concentrated mostly in the North. 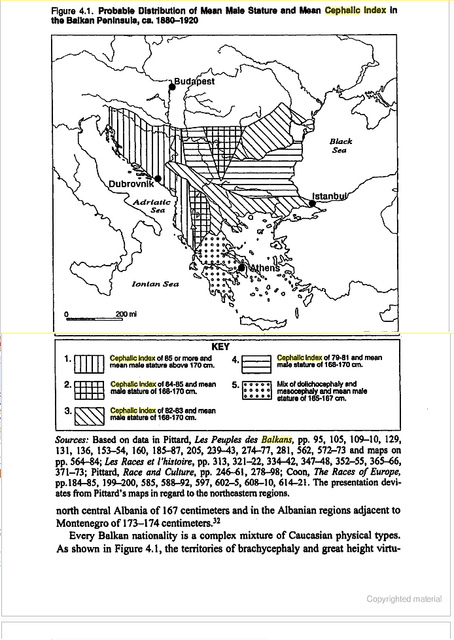 
Also Angel claims Greeks have grown taller over history, which he attributes to improvement of a healthy diet and better hygiene. And lastly despite all these changes he claims today's Greeks are still a fundamental product of the Mycenaean racial blend.


"The Mycenaean blend seems to be fundamental in all later Greek populations down to the present day. Its formation was principally absorption of Middle Bronze Age intrusive strains by the pre-Greek racial substratum."

Basically a mix of the Neolithic farmers who had settled the Aegean (and had all but completely replaced the low population density Paleolithic population) who's distant ancestry was from the Fertile Crescent region, with migrations and geneflow soon coming in from the North who's distant ancestry came in from the more mountainous Balkan regions and Central Europe. Which of course if we were to look at the Y haplogroup diversity of today's Greeks, we would see Angel's conclusion makes a lot of sense. R1a1a-M17 [M458 and Z280 subclades] and I-M423 carrying males coming in and mixing with R1b, G2, J2, and E1b1b carrying populations. Broadly speaking without getting too technical, that is how it went down in my opinion.

SOURCE : Angel, J. Lawrence, 1944, A racial analysis of the ancient Greeks: An essay on the use of morphological types, American Journal of Physical Anthropology